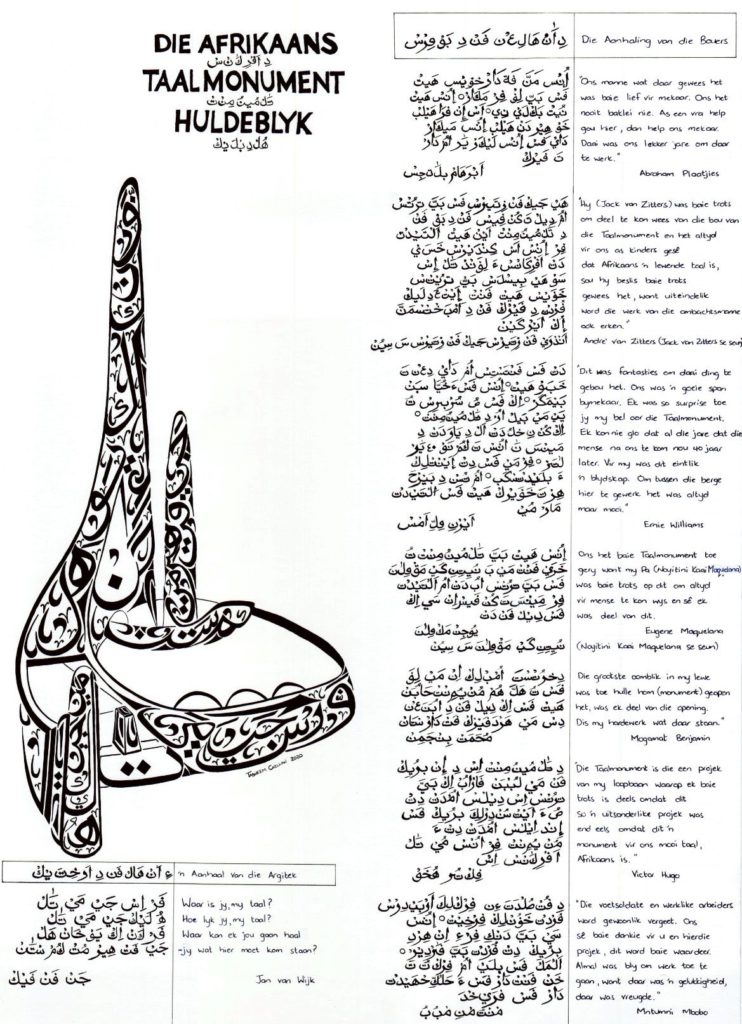 In honour of Arabic-Afrikaans’s role in the language’s development, the Afrikaans Language Museum and Monument (ATM) is delighted to exhibit the top twelve entries of the institution’s latest writing competition. As part of the ATM’s 45th anniversary in 2020, it launched a competition whereby Afrikaans texts could be transliterated into Arabic or Jawi (Arabic as adapted to reproduce specific Afrikaans sounds).

In addition to those of the winner, Gasan Kriel, as well as the two runners-up, Mogamat Alexander and Tasneem Chilwan, the entries of Albrecht Beer, Faheem Rhoda Jackson, Fuad Peters, Luqmaan Mohamed, MF Gamieldien, Mogamat Armien Slamang, Naeema Fredericks, Stefan Abdoer-Ragmaan Lombard and Uzair Ben Ebrahim were selected out of over 40 texts to be displayed in the open-air gallery where the Roman and Arabic texts appear side by side.

The positive response and numerous entries – from religious texts, original works on Afrikaans and issues such as ubuntu to the lyrics of Spoegwolf and Refentse – prove that there is still a great interest in Arabic-Afrikaans. In addition, some of the entries were received from countries such as Germany, Austria and Saudi Arabia, which is a real feather in the cap for the ATM’s international online presence.

In December 2020, the top three new Arabic-Afrikaans works were rewarded with R10 000 by the Historium Trust for their outstanding contribution to this unique writing tradition. In honour of Reconciliation Month and the abolition of slavery, an event was held in Paarl where the three writers received the prizes and Prof Hein Willemse, editor of ‘Die Afrikaans van die Kaapse Moslems’, delivered a short talk.

According to Michael Jonas, director of the ATM, the aim of this competition is to make a modern contribution to this unique writing tradition. “Our mission, after all, is to also highlight the lessor-known histories of Afrikaans and to celebrate the rich diversity of Afrikaans’s development as well as its modern forms. That is why we want to encourage people to reaffirm their participation in this language in this way,” he says. “In the Taalmuseum in Paarl we give a lot of recognition to Abu Bakr Effendi, who played a major role in the development of Arabic-Afrikaans, and thereby also Afrikaans, in the 1800s in the Bo-Kaap. We would like to see the Afrikaans community build on this.” Jonas says most visitors are not only very interested in the history of Afrikaans, but also curious about the language’s development and its latest creative forms as it offers new perspectives on the lived world of Afrikaans-speaking Africans.

The judge – Dr Shamiega Chaudhari, an expert on Arabic and head of the Department of Afrikaans at the University of Fort Hare – says it was a great honour to be able to judge this competition. “It tugged at my heartstrings that people, even from far and wide, are interested in it. I would also just like to congratulate everyone who participated. While they could not all be in the winners’ category, they are winners in my eyes. It was really a very close call.”

The exhibition in the Taalmonument’s garden runs until May 2021, but can be seen online at www.taalmuseum.co.za/groen-galery/, where previous exhibitions are also available. The architect of the monument, Jan van Wijk, felt strongly about nature and therefore he is honoured by this open-air gallery where his ashes are embedded in a boulder, surrounded by indigenous olive trees and granite. Every few months an exhibition of various up-and-coming Afrikaans writers’ works is presented in the gallery’s display cases, made from recycled wood and glass, to focus on the cultural and ecological aspects of the monument.

For more information regarding all the other exciting events such as the Valentine’s Days’ and Full Moon picnics and online workshops, call 021 863 0543/4809, visit www.taalmonument.co.za or follow them on Facebook. The website also offers virtual tours of the monument and museum, information in six languages about the symbolism of the Taalmonument as well as many interesting articles on Afrikaans, multilingualism and the institution’s past, present and future. There are numerous resources for school and research projects as well. Year permits (currently at a 20% discount) are available at R120 for individuals or R220 per family, which includes access to all Full Moon Picnics. Until the end of March 2021, all children under 18 can enter for free.