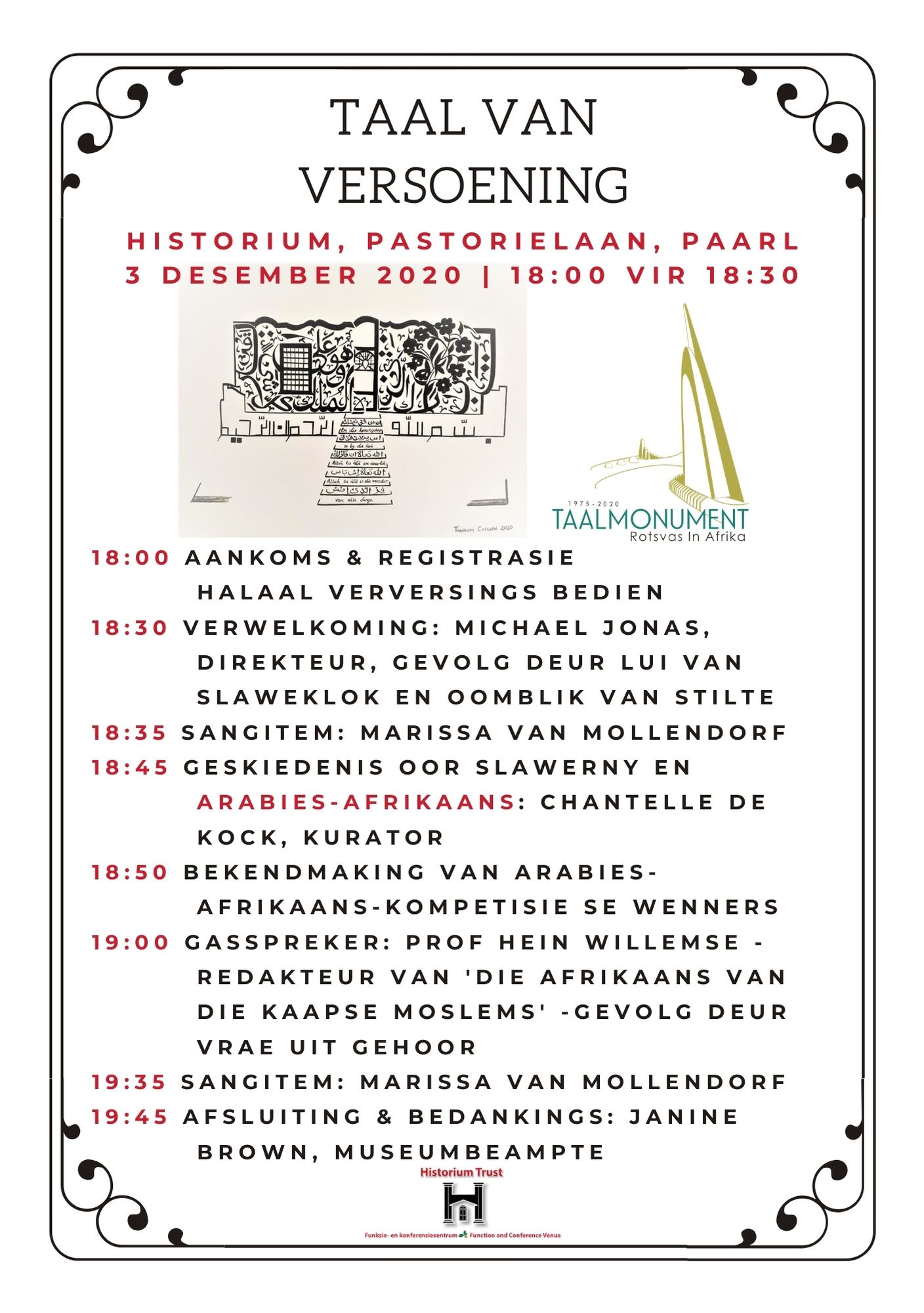 Willemse talks about the Afrikaans of Cape Muslims; R10 000 awarded to winners

In honour of Reconciliation Month, the abolition of slavery as well as the contribution of Arabic-Afrikaans to the language’s creation, you are invited to the Afrikaans Language Museum and Monument’s (ATM)’s event on 3 December 2020 to award prizes to the authors of new Arabic-Afrikaans works.

As part of the institution’s 45th anniversary, we launched a competition whereby Afrikaans texts could be transliterated in Arabic or Jawi (Arabic as adapted to reproduce specific Afrikaans sounds). The positive responses and entries have proven that there is still a great deal of interest in Arabic-Afrikaans.

On 3 December, the three winners will be announced during an event at the Historium Trust, Paarl. Not only will background information on Arabic-Afrikaans be given, but Prof Hein Willemse, editor of ‘Die Afrikaans van die Kaapse Moslems’, will give a short lecture after which questions can be asked by the audience members. The evening will also commemorate Reconciliation Month and specifically the liberation of slaves in the Cape Colony in December 1834. Delicious Cape halal refreshments, another contribution by the Afrikaans Muslim community, will be served.

According to Michael Jonas, director of the ATM, the aim of this competition is to make a modern contribution to this unique writing tradition. “Our mission, after all, is to also highlight the lessor-known histories of Afrikaans and to celebrate the rich diversity of Afrikaans’s development as well as its modern forms. That is why we want to encourage people to reaffirm their participation in this language in this way,” he says. “In the Taalmuseum in Paarl we give a lot of recognition to Abu Bakr Effendi, who played a major role in the development of Arabic-Afrikaans, and thereby also Afrikaans, in the 1800s in the Bo-Kaap. We would like to see the Afrikaans community build on this.”

The judge is Dr Shamiega Chaudhari, head of the Department of Afrikaans at the University of Fort Hare. She is not only an expert on Afrikaans and Arabic, and enthusiastic about Jawi, but also focusses on decolonisation, identity studies and oratory. According to her, few younger South Africans are familiar with Jawi, therefore the competition offered them the option to do the transliteration using the standard Arabic alphabet. “I consider it a wonderful challenge, and hopefully also a way of provoking greater interest in Jawi,” she says. Jawi is also used for among others to write Malay, Acehnese and Banjarese using the Arabic script. As there is no standardised Arabic or Jawi version of Afrikaans, entrants’ works are not measured by what is absolutely correct, but by their originality and readability.

The winner will receive R5 000 in cash and the two runners-up R2 500 each, sponsored by the Historium Trust. The best 12 entries will soon be exhibited in the monument’s outdoor gallery, where Roman and Arabic/Jawi versions of the same Afrikaans text will appear side by side. More information at www.taalmuseum.co.za/arabies-afrikaans/

Numbers are limited, so please confirm by 1 December 2020 if you are going to attend the event by contacting Jeffrey Pietersen on 021 872 3441 or bemarking2@taalmuseum.co.za. Arrivals and refreshments are from 18:00, with the official programme commencing at 18:30. No mask, no entry.

For more information regarding all the other exciting events such as the music festivals, picnics and conversations, call 021 863 0543/4809, visit www.taalmonument.co.za or follow them on Facebook. Year permits (currently at a 20% discount) are available at R120 for individuals or R220 per family, which includes access to all Full Moon Picnics.