Statement by the Afrikaans Language Museum and Monument 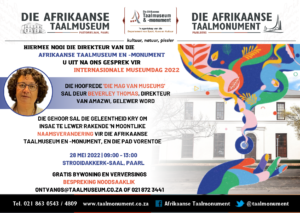 The Council of the Afrikaans Language Museum and Monument (ATM) met in Paarl over the past two days for the first time after reports surfaced of a suggested name change for the institution. We engaged with the national department of sport, arts and culture on this issue as well as on the proposed amalgamation process envisaged by the White Paper on Arts, Culture and Heritage of 2018.

The meeting was conducted in a spirit of mutual respect and with a positive attitude. No decisions were taken, and there will be further liaison with the department. The ATM takes note of the public sentiments expressed over the past week.

The Council remains focused on promoting social cohesion, Afrikaans and other indigenous languages, and multilingualism ​​- as well as the role they play in the larger decolonisation process. All the relevant information, as well as our vision and mission, are available on our multilingual website at www.taalmuseum.co.za.