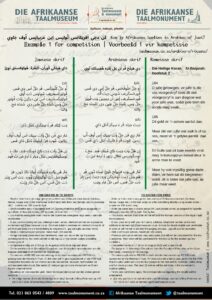 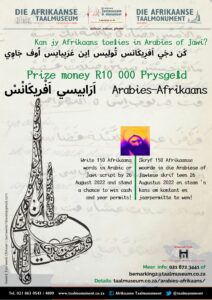 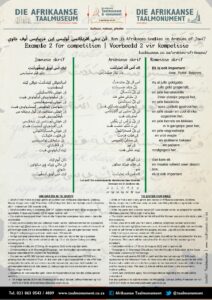 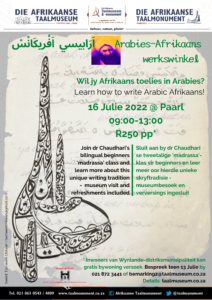 In honour of Heritage Month, the Afrikaans Language Museum and Monument (ATM) and Historium Trust once again offers a free competition in which R10 000 and annual permits are up for grabs for short Afrikaans texts in the Arabic or Jawi script. This follows the highly successful competition in 2020 when more than 40 new Arabic Afrikaans writings were received from South Africa, Germany, Austria and Saudi Arabia.

The positive response, media coverage and numerous entries – from religious texts, original works on Afrikaans and issues such as ubuntu to the lyrics of Spoegwolf and Refentse – prove that there is still a great interest in Arabic Afrikaans. Afrikaans written using the Arabic alphabet is generally accepted as the first written form of Afrikaans. Many Arabic Afrikaans writings – such as student notebooks, voting posters, publications and manuscripts – have been preserved; thus far, 74 of these works written between 1845 and 1957 have been discovered and identified by experts. Among them are excellent examples of the earliest Afrikaans literature. In addition, many more Arabic-Afrikaans writings are privately owned, which the ATM would love to digitalise for future generations.

The judge is Dr Shamiega Chaudhari, a lecturer in the Education Faculty at the Cape Peninsula University of Technology where she teaches Afrikaans as a major and Curriculum Studies. She is not only an expert on Afrikaans and Arabic, and a lover of Jawi, but also focuses on decolonisation, identity studies and oratory. She is passionate about the history of Afrikaans in general, and especially how we are all inextricably linked in the tapestry of this incredible language. In light of this competition, Chaudhari will also be hosting an Arabic Afrikaans workshop for beginners on 16 July 2022; it will be a type of ‘madrassa’ class during which participants will be taught, among other things, how to use the Arabic script and reproduce specific Afrikaans sounds.

According to Michael Jonas, director of the ATM, the aim of this competition is to make a modern contribution to this unique writing tradition. “Our mission, after all, is to also highlight the lessor-known histories of Afrikaans and to celebrate the rich diversity of Afrikaans’s development as well as its modern forms. That is why we want to encourage people to reaffirm their participation in this language in this way,” he says. “In the Taalmuseum in Paarl we give a lot of recognition to Abu Bakr Effendi, who played a major role in the development of Arabic-Afrikaans and thereby also Afrikaans in the 1800s in the Bo-Kaap. We would like to see the Afrikaans community build on this.”

The winner will receive R5 000 in cash and the two runners-up R2 500 each, sponsored by the Historium Trust. All three also win a family year permit for the ATM that includes unlimited visits for four people to the monument, museum, coffee shop and full moon picnics. To reach a wider audience, the best 12 entries will be exhibited in the monument’s outdoor gallery where the Roman and Arabic/Jawi versions of the same Afrikaans text will appear side by side.

To enter, participants must find a text in any variety of Afrikaans (standard, Griqua, Nama, Kaaps, etcetera) in Roman script or write something directly using Arabic script. Write the same text in Arabic script OR Jawi (Arabic script, as adapted for specific Afrikaans sounds) OR in both, line by line. To help with the latter, a few modern Afrikaans examples, online resources and keyboards are available at taalmonument.co.za/arabies-afrikaans/ and taalmuseum.co.za/wp-content/uploads/2021/02/groen-galery-2021-arabies-afrikaans-klein-pdf.pdf. Anyone can enter the competition; previous cash winners will not be considered for the top three prizes, but will be considered for the top 12 on display in the outdoor gallery.

For complete information on the workshop and competition as well as examples and online resources, see taalmonument.co.za/arabies-afrikaans/. Email your entry (maximum one per person, maximum 150 words) with your full name, address, telephone number and email address to bemarking2@taalmuseum.co.za. Competition ends at 17:00 on 26 August 2022, and winners and exhibitors will be notified within a month thereafter. It is open to all, and terms and conditions apply. For any queries or to submit entries via WhatsApp, contact Jeffrey Pietersen on 27 (0)76 017 6026 or bemarking2@taalmuseum.co.za.

For more information on all the other exciting events, concerts and courses at the Taalmonument, call 021 872 3441/863 0543, visit taalmonument.co.za or follow them on Facebook. The website also offers virtual tours of the monument and museum, information in six languages ​​on the symbolism of the Taalmonument as well as many interesting articles on Afrikaans, multilingualism and the institution’s past, present and future. There are also many resources for school and research projects. Annual permits are available at only R120 for individuals or R220 per family, which includes access to all Full Moon Picnics. The ATM Koffiehuis offers delicious food and beautiful views daily.