Son of Paarl to launch book at Taalmonument 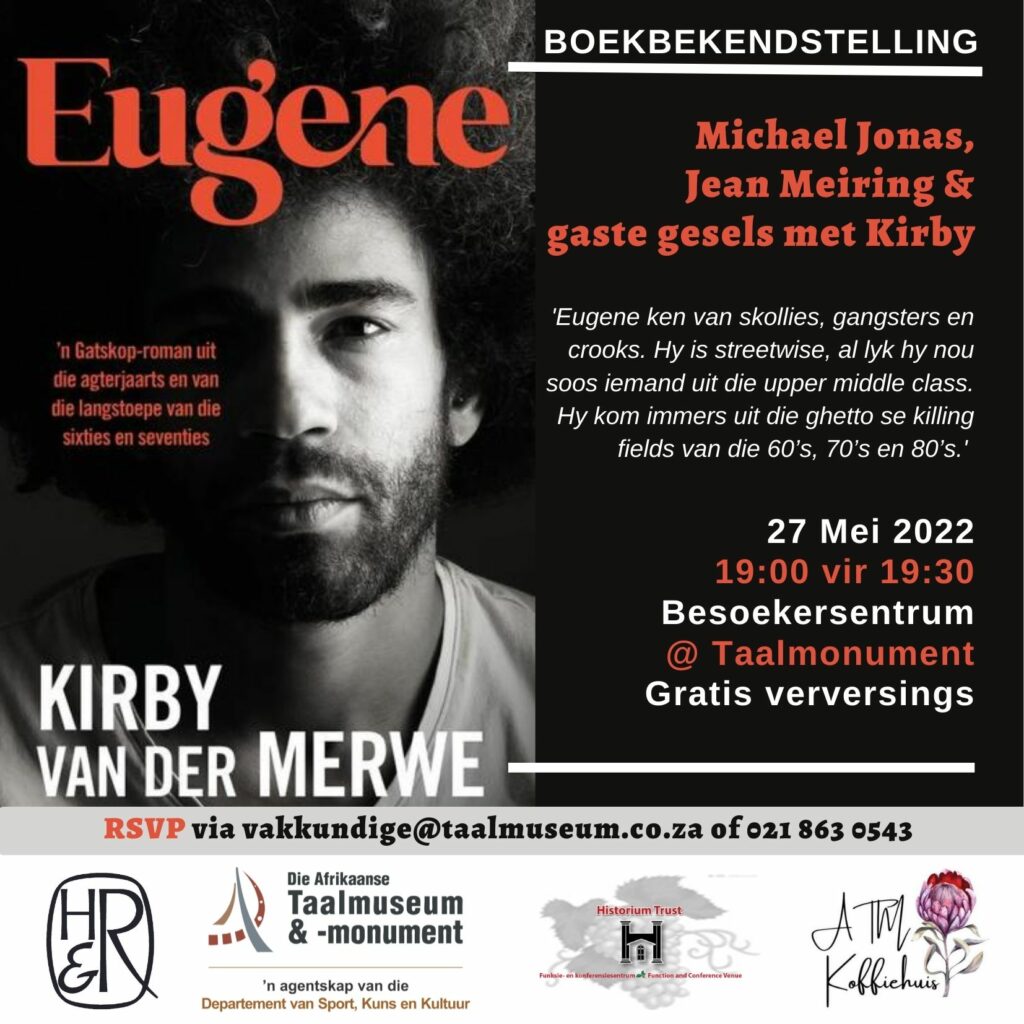 The award-winning author and Paarl-born Kirby van der Merwe will launch his latest novel ‘Eugene’ on Friday, 27 May 2022, during a free event in collaboration with the Historium Trust and NB Publishers at the Afrikaans Language Museum and Monument (ATM). This gripping book on friendship and betrayal is described as “a gatskop novel about the agterjaarts and langstoepe of the sixties and seventies”. A stimulating conversation between him, the ATM’s director, Michael Jonas, and the ATM’s board chair, Jean Meiring, promises to give guests a fascinating insight into this journalist-author and his book, after which visitors can pose questions.

Kirby was born in Paarl and matriculated at Noorder-Paarl High School, after which he qualified as a teacher. Since the late 1990s he has made his mark as a poet and his short stories have appeared in several volumes while his radio dramas have been broadcast on RSG. He was an editorial member of Insig, Huisgenoot and Beeld, and won a Mondi award, Media24 Excellence award and ATKV-veertjies for his journalistic work. His debut novel was ‘Klapperhaar slaap nie stil nie’, and as a translator he among others converted Carol Campbell’s ‘My children have faces’ into Afrikaans as ‘Karretjiemense’ and Chris van Wyk’s ‘Eggs to lay, chickens to hatch’ as ‘Daar’s ‘n hoender wat ‘n eier nie kan lê’.

‘Eugene’ has already won the third prize in NB Publishers’ Great Afrikaans Novel Competition 2021 and is being praised in the media. Rapport says “it was written in a language that does not hesitate to plant words like fists; yet it succeeds in capturing the complexity of the lives of an entire generation of people with particular sensitivity”. Vryeweekblad.com’s reviewer writes: “The book that it reminds me of the most is ‘Kompoun’ by Ronelda Kamfer – people and their quirks and experiences, their miserable suffering in an inhospitable environment and oppressive order are poetically articulated, with an eye for detail and the absurd.” Huisgenoot’s book editor reckons this “craziness of suburban gardens and ghetto streets” may be the Afrikaans novel of the year.

The event is at 19:00 for 19:30 and takes place in the Taalmonument’s Visitor Centre, after which guests are invited to the ATM Koffiehuis for free refreshments and the chance to acquire copies of the book. Due to limited space, bookings are necessary, so contact Verinque Daniels via vakkundige@taalmuseum.co.za or 021 863 0543. Those interested can also place their book orders with Ilze le Roux in advance via ilzelerouxsa@gmail.com.

For more information on all the other exciting events, concerts and courses at the Taalmonument, call 021 872 3441/863 0543, visit www.taalmonument.co.za or follow them on Facebook. The website also offers virtual tours of the monument and museum, information in six languages ​​on the symbolism of the Taalmonument as well as many interesting articles on Afrikaans, multilingualism and the institution’s past, present and future. There are also many resources for school and research projects. THE LANGUAGE MONUMENT, LANGUAGE MUSEUM AND COFFEE SHOP ARE OPEN TO VISITORS. Annual permits are available at only R120 for individuals or R220 per family, which includes access to all Full Moon Picnics.