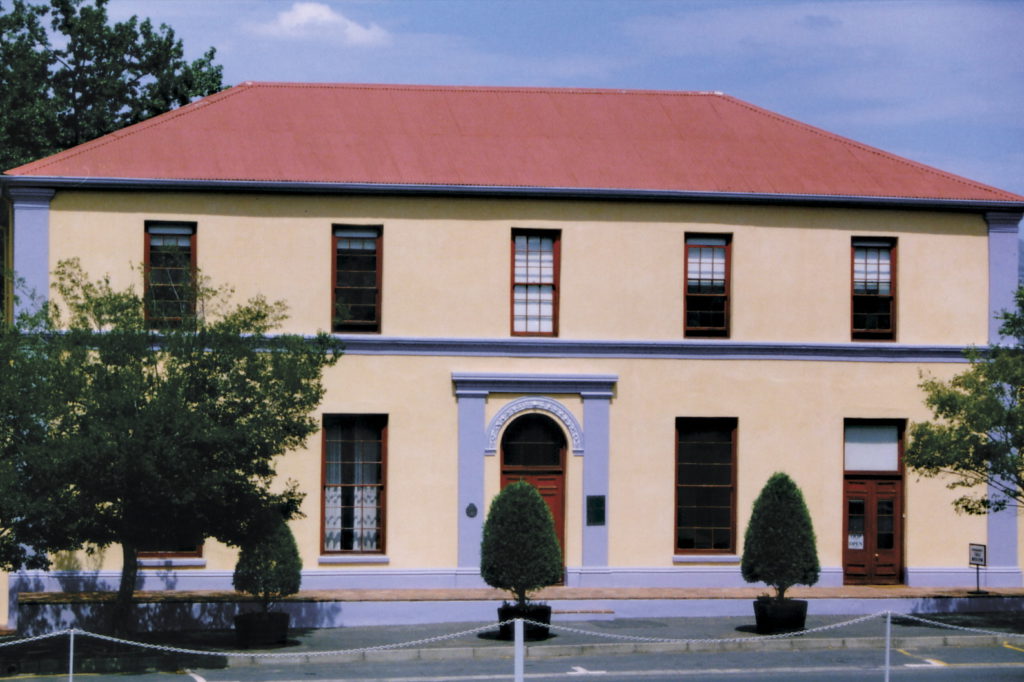 The original purpose of the Afrikaans Language Museum was to honour those people that played such an important part in the process to recognise Afrikaans as an official language of writing and reading. An important group of people in this regard was the Fellowship of True Afrikaners (Genootskap van Regte Afrikaners, GRA), founded on the 14th of August 1875 in the home of Gideon Malherbe, today the Afrikaans Language Museum. These people’s living conditions and the mood of the period are presented as faithfully as possible so that visitors can form an image of the road they had to walk in their quest, and the obstacles they had to overcome. Furthermore, it is the aim of the Museum to reflect the language’s development, its variants and contemporary expressions. Thus it conveys to the public that it is a lively, growing language, which is in a continual state of development and adapting to the contemporary world.

The house was built in the Georgian style in circa 1860 by Gideon Malherbe, a wealthy Paarl businessman and wine farmer. The ground floor has been restored to a large extent and furnished as it was in 1875, while the top floor is utilised to represent the development of Afrikaans and its various forms. The rooms on the ground floor that are furnished as in the original house, are the entrance hall, dining room, living room and the Malherbes’ bedroom. The GRA’s printing press has been returned to the children’s room, where it originally stood. As far as possible, the house has been furnished with the original pieces, ornaments and tools. Added to that, reproductions are used, for example in the case of the wallpaper, the chairs around the dining table and the sofa in the same room. Many of the objects have been donated or made available by family members and other members of the public.

The wallpaper that is seen here and elsewhere in the house is a reproduction of the paper that was originally used. It was a bit unusual to decorate a whole house with the same paper, but the Malherbes could afford it. The design of the paper with the large, heavy motifs is typical of the period.

In 1892 Gideon Malherbe undertook a hunting expedition with SJ du Toit to the Zimbabwe ruins. During this time he shot the iguana, now stuffed and hanging over the dining room door in the hallway. It hung there up until his death, after which his son, Gideon J, got it. The iguana currently hanging here is not the original, but a similar example donated by the then Cape Provincial Department of Nature Conservation. The original was burned by Gideon J and his daughter Martha as it later attracted too many insects.

Most of the furniture and objects displayed in this room were originally used in the home. Many of them were donated or lent by the children and grandchildren of Gideon Malherbe. When the museum was set up in 1975, three of Malherbe’s sons were still alive. They were able to explain to the restorers exactly how the different rooms were furnished when their father lived. The portrait against the wall is of reverend GWA van der Lingen, the father of Malherbe’s first wife, Nancy. It was also he who founded the private Dutch school De Gimnasium in Paarl in 1858 to accommodate Afrikaans-speaking children in Paarl.

This room was originally the children’s room and intended for small children. The first printing press of the GRA was an Albion hand press, constructed by Frederick Ullmer of London in 1869 according to Patent 2607. In 1876 the Fellowship bought it from the Smuts & Hofmeyr firm, which published De Zuid-Afrikaan, in Cape Town. It stood here for a while with all its accessories: the test press, screw press and bookbinding device. Gideon Malherbe’s eldest son, Peter Jacobus, was the printer. He started this work when he was only 18 years old and had to teach himself and his helpers how to utilise the press and its accessories. The portrait that hangs in the room is of Peter Jacobus and his wife, Christina Petronella Elizabeth de Ville. The first editor of Die Afrikaanse Patriot (from 1876 to 1878) was DF du Toit. He also wrote under the pseudonym Oom Lokomotief (Uncle Locomotive). The chair that stands at the press was the actual one he sat on while doing his job, and was referred to as “Oom Lokomotief’s chair”.

Some of the pieces in this room were originally used elsewhere in the house, but the bed and smaller wardrobe stood here in Malherbe’s time. The former is made of rosewood and was initially a four-poster bed, but the bedposts were later sawn off by the family. The large wardrobe belonged to Bertie and Gertie le Roux of Paarl, and the cradle was the property of the Von Wiellighs from Hendrina. Both Malherbe’s wives passed away in this bed. Nancy, born Van der Lingen, died on 27 January 1866 and Dorothea, born Jaspers, died on 28 September 1897. Malherbe himself passed away in this room on 10 September 1921 in the very same bed.

The Fellowship of True Afrikaners (Genootskap van Regte Afrikaners, GRA) was founded on 14 August 1875 in this room. Many pieces of furniture in the room are the originals, while the chairs and sofa are reproductions of the originals. Against the walls are six watercolour paintings depicting the parable of the lost son. They were painted in about 1810 by Gideon Malherbe’s mother, Leonora Elizabeth du Toit. Something striking about the paintings is that the Biblical story is portrayed in the style idiom of the early 1800s (the clothing and architecture of that time) and not the style idioms of Biblical times. The paintings with the double scenes were also made by her. Her Dutch tutor gave her prints and etchings of landscapes and village scenes that she had to redraw before painting in her own figures to tell a story. Apparently he taught a number of young girls in the district to paint and sketch in this fashion. At the doorstep is a pair of Malherbe’s clogs that he used when visiting his vineyards. The vineyards then stretched out to the Berg River. A portrait of the famous Voortrekker Sarel Cilliers hung on the eastern wall, but the current one is a reproduction. The clock against the wall and the reading table at the window are the original pieces of furniture. Malherbe often sat at the table and read in the natural light that falls through the window.