Khoekhoen Afrikaans between tree and rock 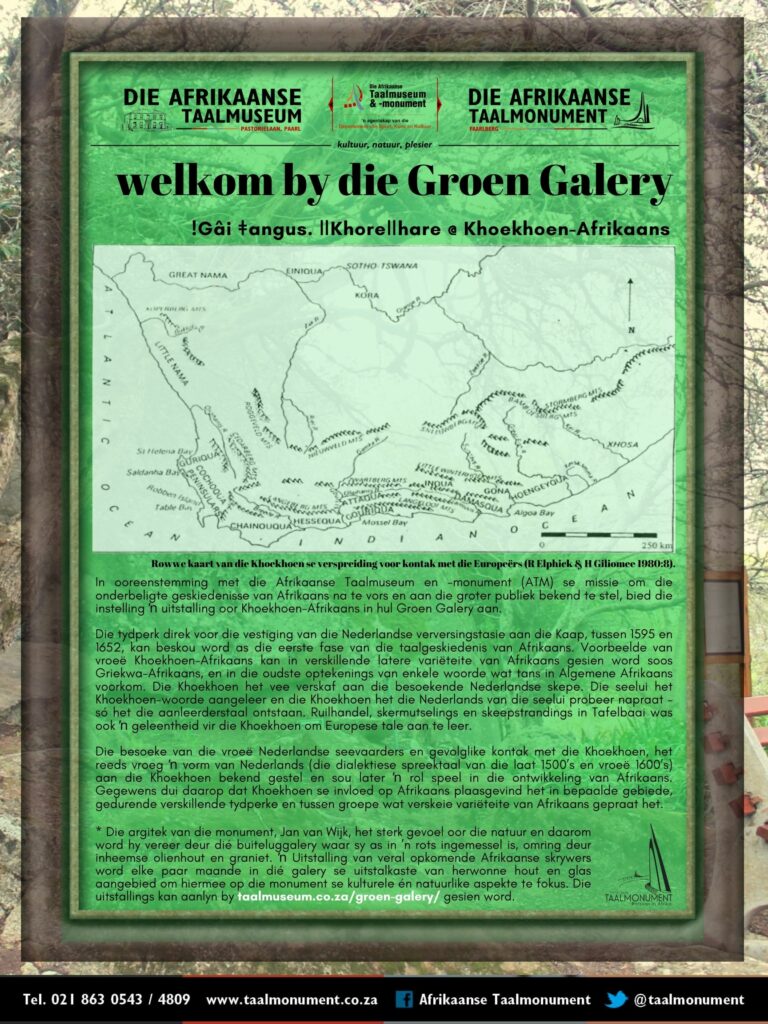 In line with the Afrikaans Language Museum and Monument’s (ATM)’s mission to research and highlight the lesser-known histories of Afrikaans, the institution presents an exhibition on Khoekhoen Afrikaans in its outdoor gallery.

The period directly before the establishment of the Dutch refreshment station at the Cape, between 1595 and 1652, is regarded as the first phase of the linguistic history of Afrikaans. Examples of early Khoekhoen Afrikaans can be seen in various later varieties of Afrikaans such as Griekwa Afrikaans, and in the oldest recordings of a few words that currently occur in generally spoken Afrikaans.

The Khoekhoen supplied livestock to the visiting Dutch ships. The sailors learned Khoekhoen words and the Khoekhoen tried to speak the Dutch of the sailors – this is how a learner’s language came about. Bartering, skirmishes and shipwrecking in Table Bay were also an opportunity for the Khoekhoen to learn European languages. The visits of the early Dutch seafarers and consequent contact with the Khoekhoen introduced an early form of Dutch (the dialectical spoken language of the late 1500s and early 1600s) to the Khoekhoen and would later play a role in the development of Afrikaans. Data indicate that Khoekhoen’s influence on Afrikaans took place in certain areas, during different periods and between groups that spoke various varieties of Afrikaans.

According to Michael Jonas, director of the ATM, the mission of this living institution is to amongst others celebrate the rich diversity of Afrikaans’ origins as well as its modern forms. “Most visitors are not only very interested in the history of Afrikaans, but also curious about the language’s development and its latest creative forms as it offers new perspectives on the lived world of Afrikaans-speaking Africans.”

The architect of the monument, Jan van Wijk, felt strongly about nature and therefore he is honoured by this open-air gallery where his ashes are embedded in a boulder, surrounded by indigenous olive trees and granite. An exhibition of especially emerging Afrikaans writers is presented every few months in this gallery’s display cases, made of recycled wood and glass, to focus on the monument’s cultural and natural aspects. The Khoekhoen Afrikaans exhibition will be physically accessible until October, but it, as well as previous exhibitions, can be viewed online at taalmuseum.co.za/groen-galery/.

For more information on all the other exciting events, concerts and courses at the Taalmonument, call 021 872 3441/863 0543, visit taalmonument.co.za or follow them on Facebook. The website also offers virtual tours of the monument and museum, information in six languages ​​on the symbolism of the Taalmonument as well as many interesting articles on Afrikaans, multilingualism and the institution’s past, present and future. There are also numerous resources for school and research projects. Annual permits are available at only R120 for individuals or R220 per family, which includes access to all Full Moon Picnics. The ATM Koffiehuis offers delicious food and beautiful views daily.