Have your say about the Taalmonument after 45 years 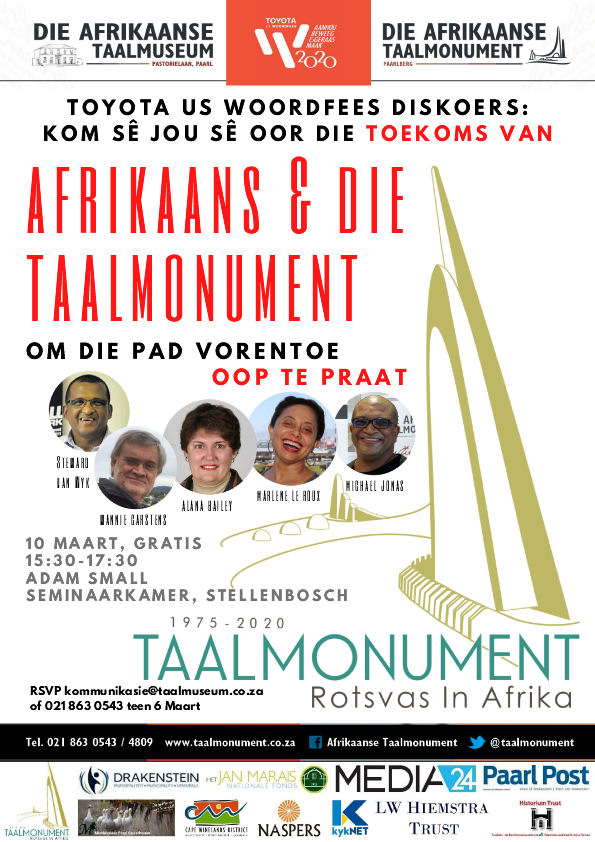 Join a fascinating Woordfees talk on Tuesday afternoon, 10 March, in Stellenbosch when the Afrikaans Language Museum and Monument (ATM), as part of its 45th anniversary, asks what exactly is being commemorated in 2020. A panel of experts looks at how this year’s celebrations offers an opportunity to find a strategy to keep this continental cultural asset relevant, and all present are polled about their aspirations regarding the monument and museum.

“How does the ATM create an environment in which social cohesion, language pride and inclusiveness are created within a language group with the largest racial diversity in the country?” Michael Jonas, ATM’s director, asks Dr Marlene le Roux, Artscape’s CEO, Ms Alana Bailey, AfriForum’s head of cultural affairs, Prof Steward van Wyk, lecturer in Afrikaans literature, and Prof Wannie Carstens, linguist and author. Audience members will also have the opportunity to ask questions and contribute.

The ATM, which has been part of a democratic South African landscape longer than that of apartheid South Africa, has already undergone a major transformation process to embrace the larger Afrikaans-speaking community and focussing attention on the overlooked histories and variants of Afrikaans. According to Jonas, the idea is to take stock of the successes, shortcomings and challenges of this national and continental asset in the past, present and future. “We want to create a platform to engage the public to provide input, which will be part of a roadmap to indicate how we want to drive the institution forward to remain up-to-date and relevant,” he says. “We want to know how we can better realise our mandate to create an inclusive space for multilingualism and all Afrikaans speakers.”

He will address eight issues by asking each of the panellists to answer two specific questions extensively. Thereafter, a lively open conversation and a few closing remarks will follow. The free event is in the Adam Small Seminar Room in Victoria Street from 15:30 to 17:30, and everyone is welcome to have their say about the future of this cultural treasure. RSVP to Riana Dempers via kommunikasie@taalmuseum.co.za or 021 863 0543 by 6 March or simply arrive. More about the Woordfees at www.woordfees.co.za.

Le Roux, a well-known activist for women and the disabled, was a subject advisor at the Western Cape Education Department before joining Artscape. Her appointment as CEO of the Artscape Centre made history because she was the first person of colour and the first woman to hold this position. She is co-author of ‘Die Wellingtonse Klopse’ and her many honours include the Shoprite/Checkers Woman of the Year Award, the Desmond Tutu Legendary Award and the Afrikaanse Taalraad’s Koker for Empowerment through Afrikaans in the arts. Le Roux also serves as a member of the Presidential Working Group on Disability.

Bailey holds a master’s degree in historical and heritage studies, and is employed as AfriForum’s head of cultural affairs. Several of her formal scholarly and less formal articles on cultural history and migration have been published, and she also regularly writes reviews for academic journals. Her children’s book, ‘Die Prinses van die Afrikavlaktes’, appeared in 2007 and was awarded an ATKV-Woordveertjie and the Tienie Holloway Medal for Toddler Literature. She is a former board member of the Afrikaanse Taalraad, the Voortrekker Monument and Heritage Foundation.

Bailey has also served as a member of the Minister of Arts and Culture’s task team on heritage transformation.
Steward is head of the department of Afrikaans and Dutch at the University of the Western Cape and vice-dean for research and postgraduate studies in the Faculty of Arts. He is the chair of the Jan Rabie and Marjorie Wallace Bursary Committee and vice-chair of the Southern African Association for Dutch Studies. He is also a member of the board of the ATM and serves on the board of the Foundation for Empowerment through Afrikaans (SBA) as well as the Helpmekaar Study Fund. Van Wyk received the Elisabeth Eybers Bursary from the SA Akademie and an Afrikoon Award from the ATKV.

Carstens, a former ATM board chair, serves or has served on various bodies regarding Afrikaans, and was involved in establishing numerous collaboration and exchange agreements with universities and other institutions in the Low Countries. He is also co-editor of ‘Die Storie van Afrikaans: uit Europa en van Afrika’, ‘Kontemporêre Afrikaanse Taalkunde’ and ‘Ons kom van vêr’. In 2014 he received the Afrikaanse Taalraad’s Koker Award for his work in service of Afrikaans. Carstens was also vice-chair of the PanSAT board.

For more information regarding this and all the other exciting events such as the music festivals, picnics and conversations, as well as the Taalmonument’s 45th celebrations, call 021 863 0543/4809, visit www.taalmonument.co.za or follow them on Facebook.