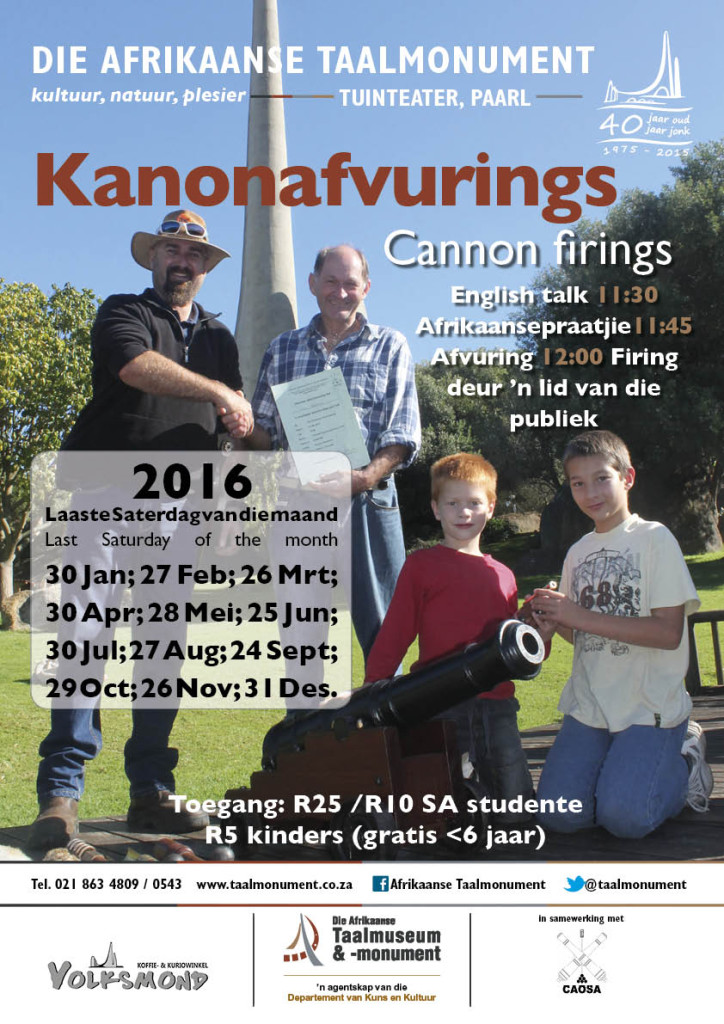 Cannon firings at the Taalmonument in Paarl

A cannon firing will take place at the Afrikaanse Taalmonument in Paarl on the last Saturday of every month – part of a series of firings to be held, in collaboration with CAOSA (Cannon Association of South Africa).

The firing includes a short talk on the history of South Africa’s cannons and the VOC cannon signal system, as well as a demonstration of the use of all the loading gear. The cannon is loaded with gunpowder (no projectile). The cannoneer will ask a question about the cannon’s history and a member of the public who answers correctly, will get the opportunity to fire the cannon. CAOSA issues a certificate as proof that this person has fired the cannon at the Taalmonument.

According to cannoneer Riaan Conradie, who is in charge of the demonstrations at the Taalmonument, South Africa has one of the biggest varieties of muzzle loading cannons in the world.

“Unfortunately many of these cannons have been grossly neglected and some even destroyed. It is CAOSA’s mission to research these cannons and the VOC cannon signal system, as well as to track, restore and display the cannons to preserve their heritage for future generations. The association has already found, measured and registered more than 1 000 of them in the DURR record of South African Muzzle Loading Cannons.”

“We are excited about extending our public firings to include the Taalmonument, as it is an important destination for South Africans who have a passion for our country’s history. In our talk we also refer to the Six pounder cannon on Paarl Mountain, and other cannons in Drakenstein.”

The entrance fee at the Taalmonument is R25 for adults, R10 for South African students and R5 for children (free under six years). For enquiries, contact Amira Clayton at tel. 021 863 4809/0543 of kommunikasie@taalmuseum.co.za.