And on a virtual Paarl Mountain Moses spoke Kaaps 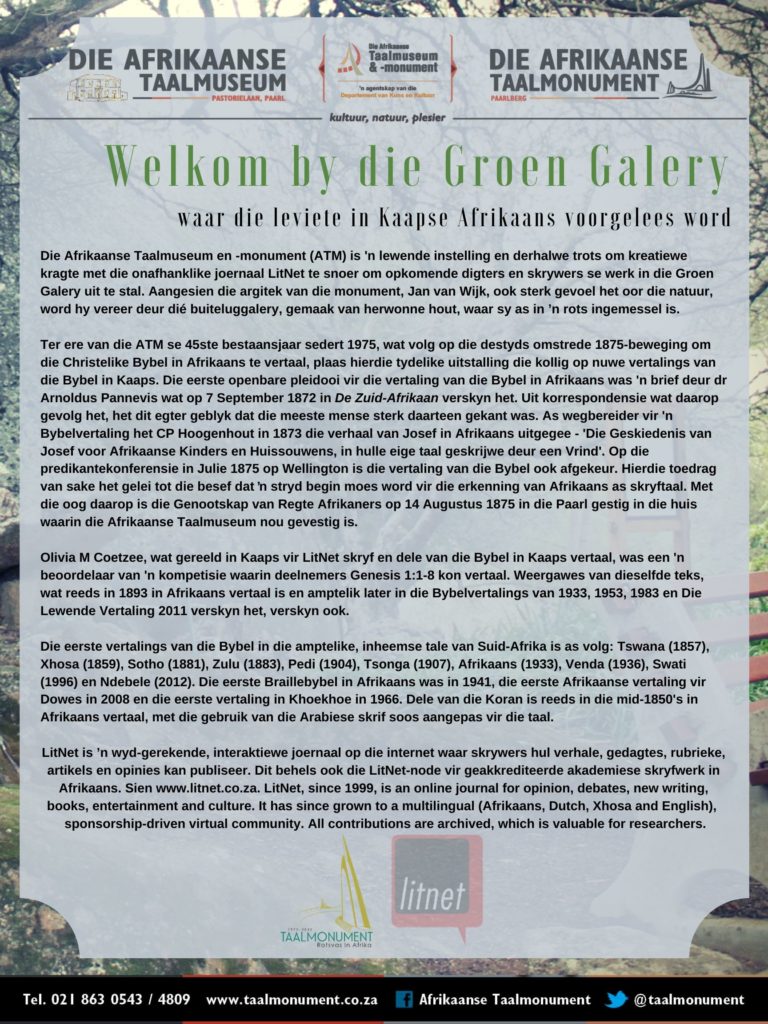 In honour of the fact that Afrikaans – and in the final instance the Afrikaans Language Museum and Monument (ATM) that celebrates 45 years in 2020 – is partly due to efforts to translate the Bible into this language, the institution is delighted to combine creative forces with the independent journal LitNet to display new Kaaps translations of the Bible in the Groen Galery. Due to the coronavirus pandemic, it is only available for free via cyberspace at www.taalmuseum.co.za/groen-galery/ for the time being, but as soon as possible, it will also be visible outdoors.

According to Michael Jonas, ATM director, the institution is a living monument where there is a continuous interaction between the structure, nature, visitors and language creators. “We like to give up-and-coming writers, musicians and poets a chance to expose their work to a larger audience. Most visitors are not only very interested in the history of Afrikaans, but also curious about the language’s development and her latest creative incarnations, as it offers new perspectives on the worlds of Afrikaans-speaking Africans,” he says. “Although we are currently temporarily closed due to Covid-19, we consider it a golden opportunity to make our web and social media presence better known by more people.”

Olivia M Coetzee, who regularly writes in Kaaps for LitNet and translates parts of the Bible into Kaaps, was one of the judges of a competition in which participants could translate Genesis 1: 1-8. The participants included Christo Meyer, Hein Kleinbooi, Handry Kortje, Ilne Fourie, Ivor Swartz, and Kyle Deon Manuel.

This specific text was already translated into Afrikaans in Paarl in 1893 as part of the then controversial project to develop Afrikaans into a language of the cloth. The first public plea for the translation of the Bible into Afrikaans was in a letter by Dr Arnoldus Pannevis that appeared in De Zuid-Afrikaan on 7 September 1872. However, from correspondence that followed, it appeared that most people were strongly opposed to it. In response, the Fellowship of True Afrikaners (GRA) was founded in Paarl on 14 August 1875 in the house in which the Language Museum is now located. The same text was adapted over time in the Afrikaans Bible translations of 1933, 1953, 1983 as well as Die Lewende Vertaling in 2011 – examples of these as well as the 1893-translation are part of the exhibition. Parts of the Qur’an were already translated into Afrikaans in the mid-1850s by utilising Jawi, the Arabic script as adapted for the language.

The architect of the monument, Jan van Wijk, felt strongly about nature and therefore he is honoured by this open-air gallery where his ashes are embedded in a boulder, surrounded by indigenous olive trees and granite. Every few months an exhibition of various up-and-coming Afrikaans writers’ works is presented in the gallery’s display cases, made from recycled wood and glass, to focus on the cultural and ecological aspects of the monument.

See www.taalmuseum.co.za/groen-galery/ for the Kaaps and previous exhibitions. The website also offers virtual tours of the monument and museum, information in six languages about the symbolism of the Taalmonument as well as many interesting articles on Afrikaans, multilingualism and the institution’s past, present and future. There are also numerous resources for school and research projects.

For inquiries about the monument or to find out more about the many popular events and discounts, including those for the 45th year celebrations, visit www.taalmonument.co.za or its Facebook page. Call them on 021 863 0543/ 872 3441 or send an email to admin@taalmonument.co.za. See more on LitNet’s Bybel in Kaaps project at  www.litnet.co.za/bybel-kaaps-kompetisie-wenners-aangekondig/